The Blindspot series continues with a hand from Ireland imps. Game at 830pm nightly

Ireland imps pairs takes place every night at 830pm with 24-28 boards of Elvis deals ..no passouts and not much 1NT all pass. 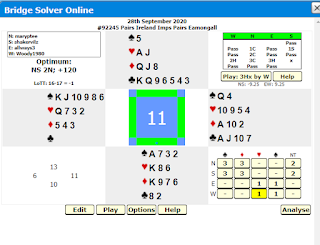 Right so with partner opening the bidding and Thomas holding a juicy 10 count of Ace and 2 Kings one fancies this will go down which it will. 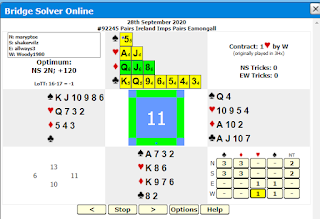 North makes the italian lead of a singleton as is not certain of the ability of HJ to work in its own right.
So spade5 lead actually drops a trick but thats okay as the "expert" Allways3 often pays back a trick. 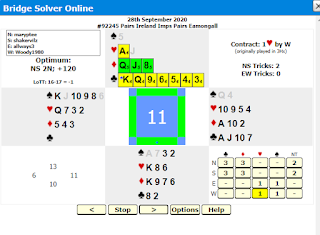 So on we go and the North after winning spade ruff with HJ for some reason figures a club King will be a good idea despite the void in the dummy. So a club it is and now Allways3 can see the light and starts to bounce in his chair and starts counting in the 9 imps for making. 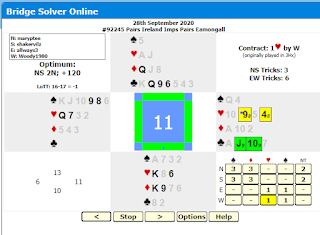 He does some ruffing and draws a round of trumps nicely and now has only 4 cards left and is still in a winning position. However now his facemask drops over his eyes from his forehead and the blindspot sets in. For some reason allways3 draws another trump as he does not learn about cross ruffing method yet. The bad news is thegarve might read this and learn some information for his next battle with allways3. So allways3 clicks on a trump and feels the same feeling as the nephew felt in Homeland as his beloved uncle pulled the trigger. 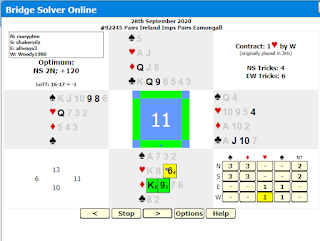 So Uncle Thomas finally reaches the stage but unfortunately only has a loose grip on allways3.
Uncle Thomas does not realise that allways3 has made a booboo and follows the old book rule of if you can draw 2 trumps for one its normally a good deal.
However it is not a good deal when there are 2 winners left for declarer and you have just dispatched your final trump.
All Thomas has to do is play a diamond and allways3 becomes allways1downdoubled.
Eventually TRUMP 6 becomes a master card and there is nothing that allways3 can do.
I presume it was a blindspot or a reflex action by Thomas but its 16 imps gone in the bin ..
Just in case the naysayers start whinging about highlighting a chaps bad hand ...I did speak to Thomas last night on this hand and told him I am firing up my blog...
He replied "LOL" ... which means "laughing out loud "
Many years ago when I made my debut on the online bridge I was greeted with all these "lol" messages ...I wondered why so many people were talking about "little old ladies" or "little old lads"
There was also "lmao" ...which I eventually learned meant "laughing my ass off "
or rotfl meaning "rolling on the floor laughing " 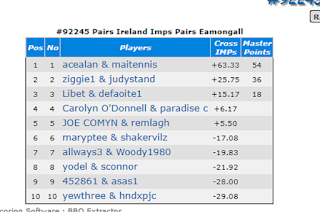 Posted by Eamon Galligan at 4:24 AM