Last night in the Ireland imp Pairs the much "put your own word in " Martin Garvey saddled up with Bob the Robot and stormed to victory. There is an idot from Yorkshire who I don't even know but for some reason she decided to term me as someone who washes Garveys car or donkey but she used more coarse words than that. A nasty piece of work I am advised. Hopefully she will stay away from Ireland Imps pairs forever more.

Anyway here are a few hands 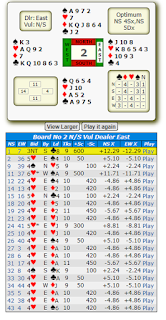 Anyway for some reason thegarve figured 3NT was a good idea.
The defence stayed off HEARTS for much too long and thegarve gathered in 12 imps. 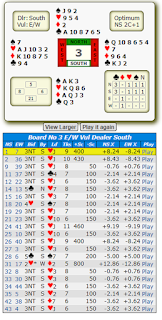 Again thegarve sails into 3NT and again the opps leave him alone to build 9 tricks and thegarve sails off with another 8 imps in the bag. Only round 1 and he has the bat out and ready for enlever.

Finally in the last round the opponent and his robot climbed into 6H and thegarve waiting patiently delivered the hammer. Another 12.5 imps. Who says you have to be good. Just wait in the grass and the food will arrive.

Plenty of decent players show up in the Ireland imp pairs. A good session for Teams practice as you can call the 4 board rounds as Team matches if you choose.

Posted by Eamon Galligan at 5:44 AM