Last night we continued the nightly Ireland imp pairs and we saw Sean and Brian win the day. 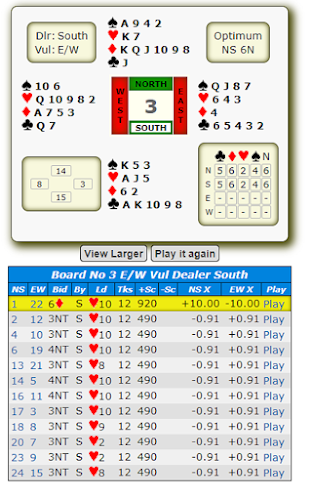 Our intrepid lads climbed into the making 6Ds. I am not fully sure what the rest of the field were doing but 3NT plus loads seemed the order of the day. This is a good 6D and needs just to play high cards. However many players who consider themselves quite decent are not getting past 3NT. Of course they will say we took the middle road and got average. Average does not win.
Surely a Strong NT in South facing the North monster should be examining slam. 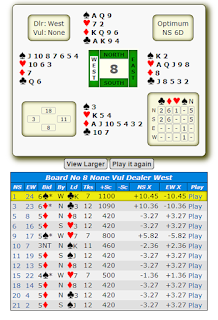 Then board 8 saw West stick it to the lads with a low point 3S opening. No problem a Skibbereen 3NT bid and a 5D bid and a 6D bid and we were in the making slam again. Not to be out done EW tried to save but were too many trick off at non vul. 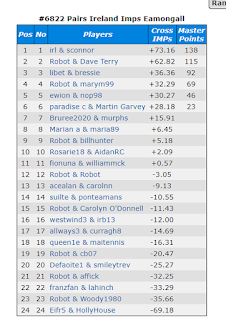 Meanwhile Dave Terry and his Bob were kicking up a storm and leading into the final board but failing to find a vulnerable game or at least take the insurance in case it made saw Terry and Bob overtaken on the final board .  number 28

Posted by Eamon Galligan at 4:02 AM