Another hand from Malahide ..here the West asked about 4C in middle of auction causing a delay 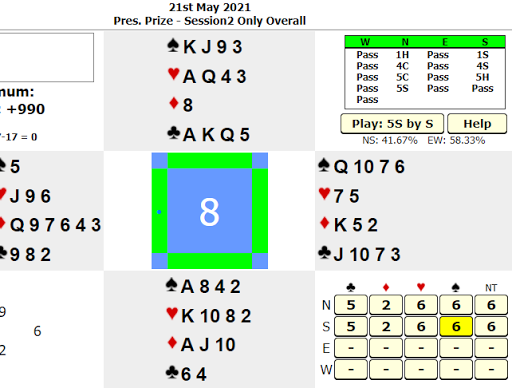 as we call it sometimes .. West decided to attempt to find out what 4C meant and on not getting any answer decided to await the answer before moving on with the bidding.

4 minutes went by as the players  sat and waited the response. Eventually the explanation was given and play moved forward. However I was called to find out "Why are you averaging board 9"

Em says I ... "because ye never played it so has to be average most of the time"

Now I have no idea why West needs to know about 4C in the middle of the auction. Maybe it is a reflex action or maybe they always ask about 4C in middle of auction in real life.

Asking can only help the opposition who might not know the meaning or might not have an agreement or might be about to have a disaster .. I personally never ask in middle of auction in case I might help out my opponents.

I wonder should I have penalized West for the 4 minutes and the subsequent lack of play  of board 9 ?

Posted by Eamon Galligan at 3:51 AM