A normal hand from Malahide Presidents that slipped by ..Hand 3 Night 2

Ireland Open Imps Pairs around 815pm every night on BBO. This is a good training session.

Last night I got a message from Mr Noel Murphy who was confessing some recent bridge sins. As is usual when someone mentions a hand we look at the big picture. 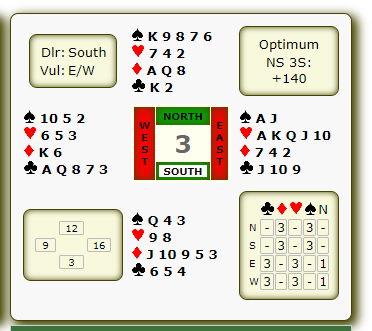 South was dealer and after an opening 1S from North most folk went to the ambitious 4H contract or the Heart partscore. Either way there was interesting stuff coming
1. Many folk led Spade 3 ....their partners suit
2. For some reason there were several leads of Spade Queen
3. On the lead of the spade 3 NOBODY ducked the lead in East when the KING rose
4. Did anyone even bother placing the cards after opening lead
5. the play of King to trick 1 places Spade Queen in South so danger is coming.
6. Transportation is there via spades to have diamond switch
7.Seriously bad news for those in 4H who draw 3 rounds of trumps and then think. 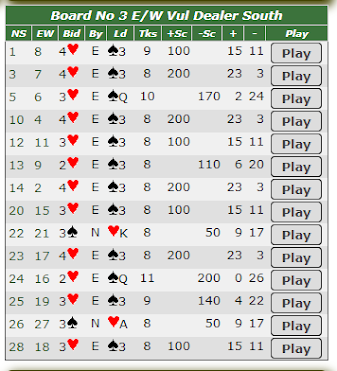 8. Lots of folk going down in 3H and 4H despite 4H being very cold contract.
(on the spade lead )
9. There are even 2 Spade Queen leads from Qxx holding
Leading the Spade Queen eliminates the entry for the diamond switch later ..
I think its an interesting hand but maybe I have a twisted mind.
Now in fairness when I glanced at the hand after the Murphy tribunal I noted the spade duck being touted by the double dummy solver and knew there was something to examine here.
A sweet hand indeed ..

Posted by Eamon Galligan at 2:11 AM