Ireland Open Imps Pairs at 8pm every night on BBO. This is a good training session as well as competition. You won't leave this event without some story.

Bridgebase online competitive all tournaments and search for eamongall. 2 BBO dollars gets you 28 boards of good hands and usually some very capable opponents. The Swiss format means most folk play against their peers.

Yesterday Saturday January 8th we had CBAI v NIBU in Camrose normally a comfortable win for CBAI but in these strange times the regular squad got beaten in the trials for the event. So it was a confident NIBU squad who went into battle as they knew they were playing equals as opposed to the famous Thomas "No medals " Hanlon and his sidekick Hugh McGann. NIBU also has "The Beast" on board. For some reason Paul Tranmer has found a massive run of form in the last 9 months or so and given he is sitting in the same chair and sleeping in the same bed there was hope for NIBU. 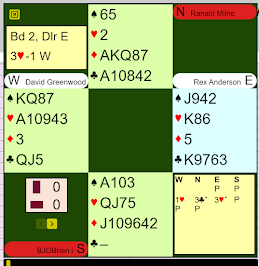 Board 2 and North makes a bid showing both minors. I think it is the dreaded Ghesthem or something similar. Anyway somehow BJ O'Brien left this bid pass him by ..must have been a misclick as everything points to a diamond contract.

1. He has 6 card support for his partner

2. He has 4 Hearts indicating shortage in partners hand

3. So he got 11 card fit and singleton and void to use those trumps on so its totally bizarre not to be motoring.

4. In my world BJ has an opening hand and his vulnerable partner is bidding. So thats opening opposite opening so something went wrong.

5. Just in case the 3C bid was alerted as "minors"

Board 15 seems unlucky for CBAI but unfortunately I have no idea what 2D overcall means but it meant something and steered NIBU into a hard to beat 3NT contract but declarer may have telegraphed the defence. 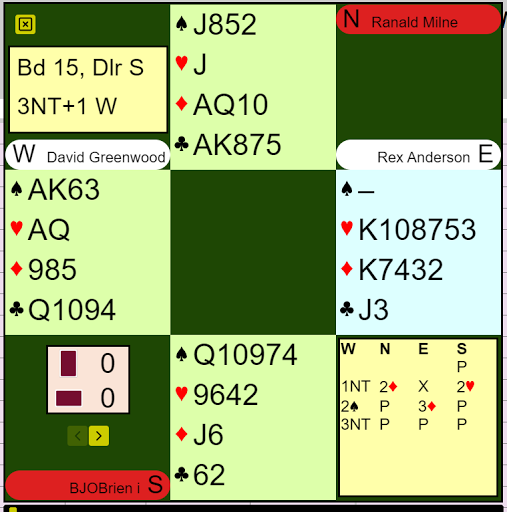 Maybe I am wrong but after Greenwood trick 2 diamond to King is the defence not in charge. A little bit of minding the entries and the defensive communication.

However the CBAI contract of 4H had no hope after 3 slaps of the club suit. Another 11 imps gone. 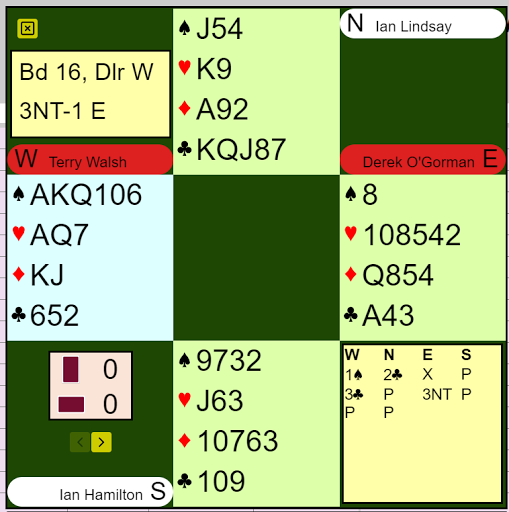 3NT has no play at all ... Lindsay already told about his clubs so its bizarre to play in 3NT when you got a 53 heart fit. Another 12 imps in the bin.

Something has gone wrong with these grandmaster players who put the fear of God into all opponents when playing in the CBAI events.

I will just show one bizarre hand from the 2nd half. A result I have not seen since I was learning the game in Swords in 1985. I gleefully got Pat McMahon down 9 in 3NT with my great heart suit. Later I found out it was 0% as vulnerable game beats 9 down non vul. 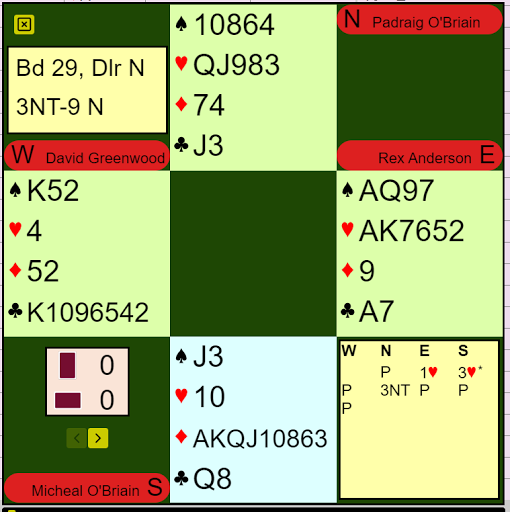 Here it is Padraig O'Briain down 9 vulnerable in 3NT losing all 13 defensive tricks to Greenwood Anderson. Now maybe its an okay ploy as one would figure there is slam on for the NIBU lads. However it was minus 900 and 9 imps away. I know the plan was to run to 4D if doubled but it never happened and Padraig is still waiting for the race to start.

And all except 3NT-9 was before Wayne unleashed the Beast.

Posted by Eamon Galligan at 1:52 AM