Ireland Open Imps Pairs at 8pm every night on BBO. This is a good training session as well as competition. You won't leave this event without some story.

Heres a story from NIBU versus England. The Australian Dyke probably thought all his Xmas's here together. The mighty Tranmer is in 2DX and he has the Souths lot opposite his partners opening bid plus reopening double.

Santa Claus or whatever they call him in Australia has landed. 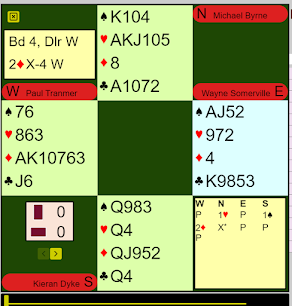 One also noted a CBAI trained bridge teacher also stepped in the doggy poo on this hand so I guess that makes Tranmer's bid okay then.
https://kibitz.realbridge.online/
The above link has the Camrose weekend results and much more information
The above hand was hand 4 of match 1.
Team BJ won the Camrose at the weekend.

Bridgebase online competitive all tournaments and search for eamongall. 2 BBO dollars gets you 28 boards of good hands and usually some very capable opponents. The Swiss format means most folk play against their peers.

Posted by Eamon Galligan at 6:16 AM