Folks
Just in case the hand below is not meant to highlight the declarer TS90 going down ...you would have to be on fire to make this hand .. TS90 was the only chap playing it rightsided. All others faced the spade lead. Also I did not know it at the time but the postman was coming with a piece of paper with TS90s name on it.

Last night I was studying some previous games to see how did the unknown Grandpa Tom win my Ireland Imp Pairs two nights in a row. That used to be the realm of MrT2000 and remnart before thegarve threw the toys out of the pram at them and then followed the next time with the pram as well. However I quickly forgot about Grandpa as I noticed a weird thing about the below hand. 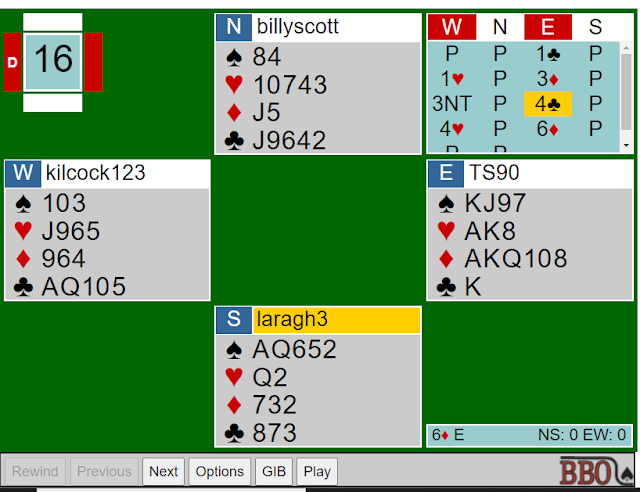 Looks like down 1 but GIB says makes .... Have a look ..
Most people were banjaxed by 2C 2D and its wrongsided .... but if played by East its grandpa proof.
(in real life someone bid 6D and grandpa was lucky to be on lead and knifed out a spade lead.
However in the above diagram ...its East as declarer and worth a look for 12 tricks ...

A sweet hand and even sweeeter if one could make it .. the interactive is below,
Make 6D

Posted by Eamon Galligan at 4:42 PM