BJ indicates his fear of the unknown

Last night in the Ireland Imp pairs we had a standoff. Super grandmaster BJ O'Brien refused to play against MrT2000 and remnart. He did not indicate the reason but I suspect he wanted to protect his young partner Conor Boland from getting a trimming from the international Camrose player Paul Tranmer. BJ asked me whats the deal ..and I told him ..."I can replace you with a robot or grant you 3 average minus scores ... In real life it would be 3 0% and 3 60% for Tranmers

Eventually BJ agreed to play but indicated it would be slowly. So no point in stoking the fire without showing the ashes. 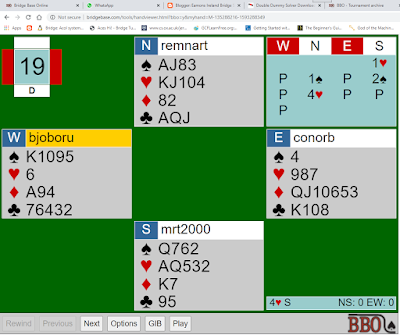 The first board hits the table and the Tranmers quickly bid to game in 4H after stopping briefly to agree a reserve suit just in case. A doomed contract and BJ unleashes his 2100 B points of experience and finds the double dummy lead of a club. Tranmer tries the finesse and loses to King. Boland fires back Diamond Queen and the defence have 3 tricks and a spade to come. Down 1 ..a fairly normal contract but 4 imps to BJ due to other tables.
However at least 9 of the 15 pairs who allowed it make would consider themselves capable bridge players so something needs improving on their defence. The intermediates and below are supposed to allow it make because thats why they are intermediates. The good news is that nobody managed a misclick or whatever to remain out of game. 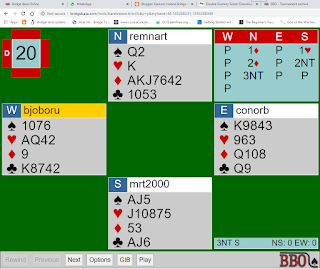 Onto the 2nd board. North fires off a normal 1D opening and South responds a normal 1H and a solid 2D response and a cautious 2NT invite and a normal 3NT game bid.
BJs 2100 B points calculates a nice club lead but the contract is unbeatable and the stronger  Tranmer rolls home 10 tricks. 4 imps to Tranmer as despite the 9 card diamond source several pairs languish in a diamond part score and some are putting the cold 3NT on the floor somehow. A lack of card play skills in keeping communication in the diamond suit. 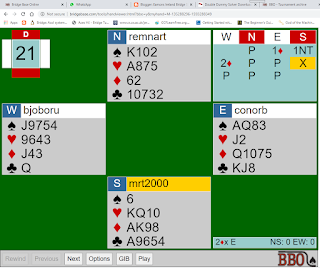 So even stevens after 2 boards and the 3rd board looms. Conor Boland opens 1D and strong Tranmer overcalls a fairly normal 1NT. BJ finds an intermediate 2D bid ..a very poor bid and its paased around to Strong Tranmer who tries a double with AK98 of trumps. Buying an Ace and king up North is nice but BJ in the West had no business bidding. Down South the bunnies run and hide when big dog BJ enters the park but Strong Tranmer is not afraid of losing 180 to BJ for an upside of much more.
Gathering in 500 shows it was worth it.
Why is BJs bid so bad ....well it missed the 9 card spade fit and guided his partnership into a going minus 4-3 fit which went badly wrong for Conor Boland and 9 imps to the Tranmers.
Most EW played the hand in 2S but Strong Tranmer's 1NT put paid to that.
BJ could have passed out 1NT ..put his 2100 B points in the bin and led a simple 4th highest spade and its down 1. No need to offer chances to the Tranmers.
..................................
Loads of moderate CBAI area masters are offering loads of free imps and matchpoints to the Tranmers thus creating a possible illusion of some dark arts being practiced. A grandmaster bridge player like Tranmer just laps up free stuff. He might be practicing black magic or red magic or no magic at all.
He claims they just bids simply and defends simply. Maybe the CBAI Area and Regional Masters are overvalued and 1 Red point from NIBU is worth 20 CBAI B points.
I know some Area Masters who attend the Holmes Wilson religiously every year as they are guaranteed 1.5 B points even on a bad weekend. Two of the boards above and below  indicate the horror stories a 2100 B point Irish bridge legend can produce so the 20 B point Area Masters will no doubt produce much greater and many more horror stories.
Possibly as the Ireland Imp Pairs is just a fun event folk are not playing their top game.
However any intermediate pair (I have spotted a few)   featuring near the top of Ireland Imps Pairs regularly might need to be given a broomstick. Tranmer is meant to be placing in the top 10 as he is an international player. However any player who averages 56% in face to face and suddenly ups it by 10% plus might be taking the study drug before playing ..Adderall, Dexedrine, or Vyvanse.
..................
Adderall ....seems like a nicely named one or Leaderall or Tellerall.
.................................................................. 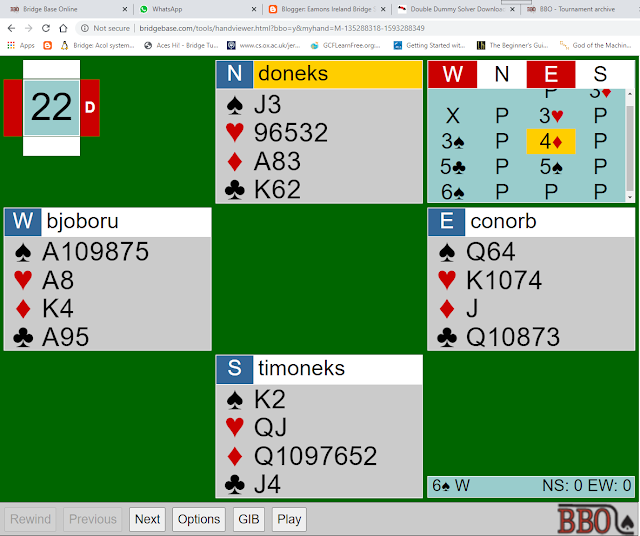 Probably bothered by his eclipse by Strong Tranmer BJ sails into a hopeless 6S and the Meath masters gather in 11.5 imps for doing nothing.

Posted by Eamon Galligan at 6:03 AM