DNR Regional Teams ... the winners are the Inter As leaving the Masters behind.

This morning while examining the Robots dash through the Dublin North Region Masters competition I spotted the robot toying with the masters. 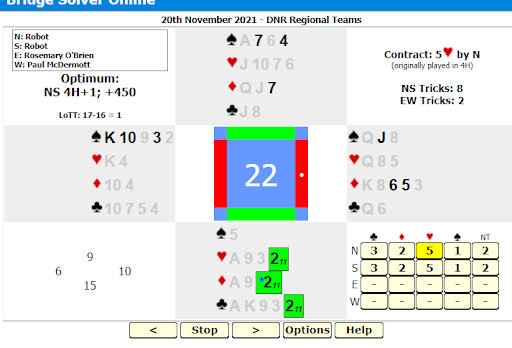 Robot did not rub it in though and played diamond 2 to diamond 7 ...as East

has diamonds higher than the 2. Still it makes a pretty picture.

Unfortunately Robot team failed to qualify for the Regional Teams as it got beaten by the powerful Intermediate A team powered by the Sutton Kellys and Sheena Duffy and Evelyn Doyle. Its interesting that an intermediate team can win a Master competition. Well done to them.

Congratulation to the Deane team who won the best Masters prize despite getting destroyed by the robot squad 19-1 in the last match. Happily they still qualify as best Master Team despite being 11 VPs behind the winners.

Big problem is will they as winners be sent forward as the Master Team and miss out on their chance to win the All Ireland. Surely a team that defeats Masters should be a warm favourite to win the As.

Were the National Finals of 2020 ever held. Did the teams who won in November 2019 ever get to play in their Nationals ... I cannot remember what happened then.

Great experience for the Inter Bs to play against the DNR masters.

Posted by Eamon Galligan at 2:02 AM