This weekend Oct 29-31 CBAI hosts the Camrose Trials. 9 teams have entered and will do a round robin to eliminate the 5 lowest scoring teams 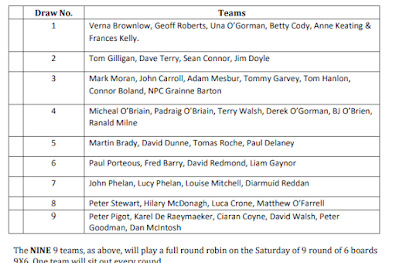 Teams 3 and 9 will progress to the Final 4 round robin.
However in 6 board matches upsets can happen and VPs can be lost
The other teams prospects are in my view.
Team 1 will struggle to find a win but the law of averages means they will beat someone and lose the majority of their matches. They are lacking a bit of experience at this level.
Team 2 anchored by Jim Doyle from Wexford and the experienced Dave Terry will come up short as Connor and Gilligan lack a little something. However in 6 board matches they could take enough points off teams 3 4 and 9 to remain competitive.
Team 4 despite having a full international squad and Senior Bowl quarterfinal experience could struggle with the 6 board format leaving them vulnerable. My first thought was they would easily qualify but
it is hard to rank Team 4 far and away above the Phelan and Delaney Teams
Still they have the mercurial BJ O'Brien on point so should make the final 4.
Team 5 will struggle to complete most of their matches as they are a rather thoughtful crew. Back in the day playing in the Burke Cup in the 1990s David Dunne arrived tardily at the table to find the TD Joe Murray had already declared one of his hands for the next match. David had been slow declaring the last board of the previous match so Joe Murray solved the issue in his own way.
Delaney and Roche are no slouches when it comes to winding down the clock.
However a very capable team and can do damage to any team over 6 boards.
They will be expecting to make the final 4
Team 6 led by the experienced Paul Porteus and anchored by the Precision Twins will play well but come up short. Their 4th man Fred Barry is well capable of declaring a few hands very well. A dangerous opponent back in the old Regent Days when even the tail end of the field could damage you.
The current day Regent is not the same power as back in the 1990s when 32 internationals regularly togged out for 2 week events. Redmond and Gaynor the pride of Mid Leinster will wield their precision club with pride but it will be Swing and a miss most likely.
Team 7 led by the mercurial John Phelan and including 4 full internationals will aim to make
the top 4 places. However this team holds the record of being the only team to achieve a minus score
in a Camrose Trophy match. I recall them losing 20-0 and as the opposing team slowed them down
so much they had to concede a VP or half a VP in time penalty.
They will be close enough to the Final 4.
Team 8 led by Peter Stewart could lack some experience as they have some youthful players on their squad.  Luca Crone being an Area Master and his partner Matthew showing up as an A2 player
on the CBAI online entry system. I am sorry but either the online system is broken or maybe they qualified via the Preliminary Trials in September. However I don't think they can make the Final 4.
It will be a great experience though and will help their game. However I understood folk lacking the required masterpoints had to come through the prelim. However back in the day the multi talented Derek Stokes played in Camrose Trials with Eamon. To quote " I have enough masterpoints for the 2 of us ..Would you like to play in the trials  " said Derek after finding out he was no longer required as director of the international trials.
So teams 3 and 9 ..... with Phelan Delaney O'Briain  battling for final spot.
Teams 2 6 and 8 will come up short.

Posted by Eamon Galligan at 5:17 AM